In the news Morning Joe

Morning Joe is a popular news broadcast on NBC. It is hosted by Joe Scaraborough, a former Republican representative in the House of Representatives, and his female co-host, Mika Brzenzinski.

According to the show`s webpage they provide breaking news and in-depth analysis, commentary and informed perspectives about the latest headlines.

The show that we are going to take a look at today was originally broadcast on July 31, 2020, and deals with President Trump`s comments on delaying the federal election in November. Other guests commenting are Willie Geist and former Republican National Committee Chairman, Michael Steele. 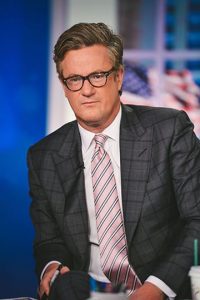 Transcript
Lesson Content
0% Complete 0/1 Steps
Morning Joe – vocabulary and grammar
Keywords Past Simple – Present Perfect
Past Simple or Present Perect
for or since
Back to Course
Next Lesson
Scroll to Top
Login
Accessing this course requires a login. Please enter your credentials below!
Lost Your Password?